THE AUTOBIOGRAPHY OF AN AMERICAN GHETTO BOY

THE AUTOBIOGRAPHY OF AN AMERICAN GHETTO BOY
PURCHASE THIS BOOK ​Trade Paperback – $19.95 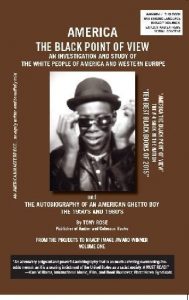 THE AUTOBIOGRAPHY OF AN AMERICAN GHETTO BOY

Impressively well written, exceptionally and effectively organized and presented. As informed and informative, as it is thoughtful and thought-provoking.  Should be a part of every community and academic library.
​ – James A. Cox, Editor-in-Chief, Midwest Book Review

White racism, slavery, and ongoing bigotry are to blame for the problems of black America, as well as the author’s violent youth, according to this manifesto and accompanying memoir.  Rose, opens his book with an essay.  Its subjects include the sins of white people against Africans,  surveying the horrors of the Middle Passage; the violation of slave women by white owners in the American South and the brutalization and emasculation of black men;  the drug trade in black communities, which he contends is organized by the U.S. government; police killings; and the ingrained racism of some 70 percent of whites.

Rose’s history of slavery and racism, contains much truth.  However, it also contains exaggeration and stereotyping of people of European descent, whom he characterizes as “primitive, barbaric, vicious white monkeys, who, descended with the horrors of their psychotic desires and thirst for blood, rape and death on so-called uncivilized African and people of color throughout the world.”  He calls for reparations, and urges African-American youngsters to avoid drugs and crime and get an education; less constructively, he suggests that “whenever we meet or see a white man we should all just spit on him for the death of our millions of ancestors.”

The volume’s second part, recounts Rose’s grim upbringing in the purgatory of Boston’s housing projects.  He writes of being perpetually hungry; abandoned by his father, a career pimp and mob hit man who was often in jail; regularly beaten by a mentally unstable mother; and preyed upon by merciless gangs—until he joined one and started committing robberies.

​Overall, the memoir and prose is vigorous and vivid, and sometimes pungent, scabrous, and sexually graphic.  It leaves a lasting impression of the chaos, deprivation, and psychic ravages of the ghetto, but also gives readers a more nuanced, three-dimensional view of its social life and its people.  A sometimes-distorted and sometimes-revealing portrait of a nightmarish United States.
– David Rapp, Kirkus Book Review

THE AUTOBIOGRAPHY OF AN AMERICAN GHETTO BOY
PURCHASE THIS BOOK ​Trade Paperback – $19.95

other books www.theghettoboy.com available on amazon.com